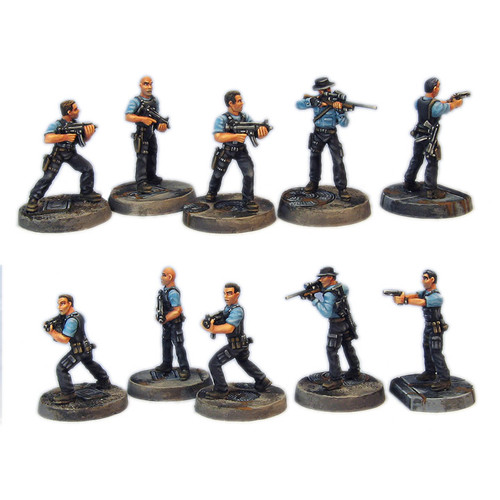 SWAT Light? Nah!! These guys have what it takes. They're perfect for kicking in the door of your neighborhood drug or gang warlord. Four of the team are sporting the universal body armor and H&K MP5, plus backup weapons. The fifth man is the team sniper, armed with his Remington sniper rifle and an AR-15 slung for backup. This is a unit of five 28mm scale NARC Squad members including 25mm resin Urban Bases. Also included are cardstock markers for crouching, prone, flashbang and chalk outlines. Designed for Mobocracy - Body Count Skirmish Rules. Models painted and photographed by James Wappel. Sculpted by Drew Williams. Models supplied unpainted and unassembled.

Supplied with Cityscape bases that are cast in resin