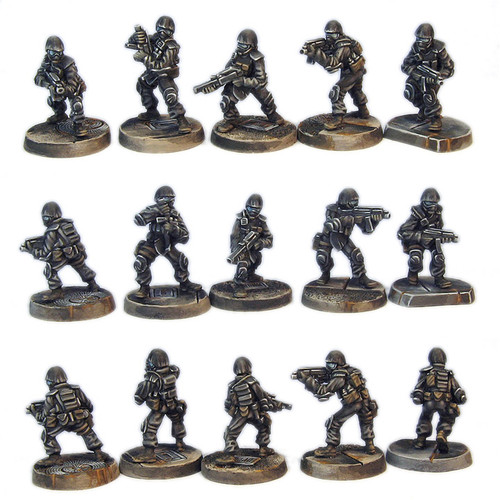 The S.W.A.T. Team is a 5 pack of 28mm figures including 25mm Urban Resin Bases. Also included are cardstock markers for crouching, prone, flashbang and chalk outlines.
When things go bad these guys are in the thick of it, kicking butt and taking names. The first man in is the door breacher, he's armed with a Remington shotgun. The four men behind him are armed with MP5A3s with double stacked magazines. All are outfitted with kevlar helmets, body armor, handguns, flashbangs and ammo. This pack was designed as a generic CQB unit, excellent for use as SWAT, Special Operations, DEA, Federal Marshalls, whatever. Sculpted by Drew Williams. Models painted and photographed by James Wappel.