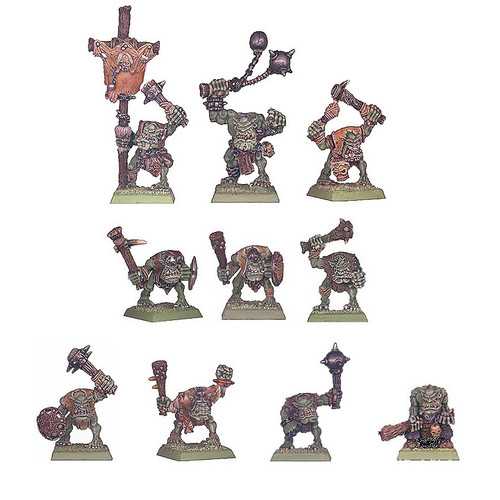 Azohg's Fearsome Orcs are extremely dangerous creatures that have no desire other than to kill. They are typically clothed in rough hides or skins and carry huge clubs and other blunt instruments as weapons. Azohg regiment of 10 models.

Few have survived the attack of Azohg's Orc warriors, and those who did were unable to articulate the horror they had experienced!

Greedy and covetous, Azohg's warriors love treasures almost as much as they love bloodshed, so they are always ready to be hired by any master who pays a high reward for their brutal services.

Azohg is a massive muscled orc whose love for blood and violence has resulted in his nickname, "The Butcher". Since he has little regard for his own safety and an intense hatred for most living creatures, Azohg is an extremely dangerous opponent for any warrior -- a vicious and unpredictable hunter, always eager to fight to the death.

The figures are multi-part pewter castings and need assembly and are supplied unpainted. Square 25mm bases are supplied.