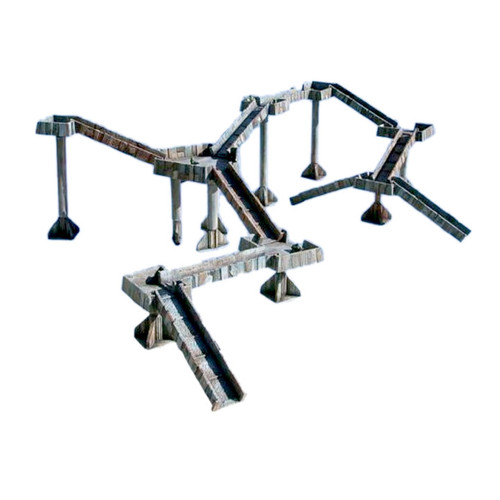 Armorcast's Large Tech Walk system allows for fast paced tactical combat in a dark futuristic setting. The gritty details of a worn, rusted and combat damaged fire base are sculpted into the design.

Designed for infantry and other figures on 32 mm or smaller bases, this multi-level system offers advantages for snipers, and other infantry specialists to get the drop on other units. It makes a great play space for gang type games with capture the flag and hold the high ground scenarios. It is structurally very sound and steady and packs into a smallish box when done. The gritty details of a worn, rusted and combat damaged fire base are sculpted into the design. It works well with games like Osprey's Scrappers, Megacon’s MERCS 2.0, Games Workshop’s Shadow War Armageddon, Corvis Belli’s Infinity, Games Workshop’s Warhammer 40K, and other futuristic small squad games. Individual pieces can be used to form piers and outlooks on the short, and pedestrian walkways over major roads. It works well with Armorcast’s Tech Canals, Gothtech Structures, Overhead Pipeline and Modular Refinery. All walkways are modular, interchangeable and (with the tiniest bit of effort) easily adaptable to other buildings kits.

Figures are not provided, they are only shown for scale. Terrain supplied unpainted and unassembled.