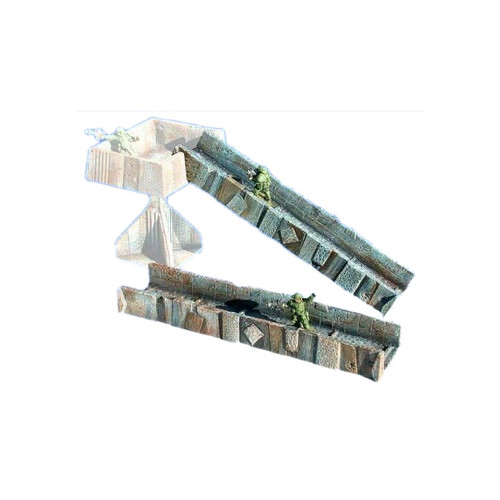 'Fritter Tek Tech Walk system allows for fast paced tactical combat in a dark futuristic setting. The gritty details of a worn, rusted and combat damaged fire base are part of the design. The kit includes two (2) armored ramp. Figures are not provided, they are only shown for scale. Terrain supplied unpainted and unassembled.

It makes a great game play for gang type games with capture the flag and hold the high ground scenarios. It is structurally very sound and steady and packs into a smallish box when assembled. The gritty details of a worn, rusted and combat damaged fire base are supplied in laser cut sheet stock, both chip board and corrugated panels are supplied. It works well with games like Osprey's Scrappers, Megacon’s MERCS 2.0, Games Workshop’s Shadow War Armageddon, Corvis Belli’s Infinity, Games Workshop’s Warhammer 40K, Necromunda Ash Wastes and other futuristic small squad games. Individual pieces can be used to form piers and outlooks on the short, and pedestrian walkways over major roads.  All walkways are modular, interchangeable and (with the tiniest bit of effort) easily adaptable to other buildings kits.

Made with Laser Cut MDF, Chip board and PVC tubing. The model is unpainted and unassembled in 28mm Heroic scale. Miniature shown for scale and not included with the model.